People often ask me about how to restore a bicycle. My first question is does it really need restoring?’. My personal philosophy is that I try to avoid restoration wherever possible. I consider that rare bicycles are important historical objects which should be treated with respect and sympathy, and their handling should be like that a painting might receive in a museum. For instance, over-painting or traces of poor restoration might be removed, but originality retained as much as possible. Unlike items in a museum, though, I prefer bikes to be usable.

Often bicycles are restored without a proper assessment of their condition taking place. So, the first thing to do is to clean the machine carefully but thoroughly, removing all encrusted dirt to establish the condition of the surfaces beneath (although there is some argument for leaving a certain amount of dirt as it can be considered part of the machine’s patina!) Oily and greasy parts can be cleaned off with paraffin, but avoid getting this on transfers or lining. Areas of paintwork can be tested by intensive cleaning with a mildly abrasive material such as 0000 wire wool or Renaissance ‘Pre-Lim’, which cleans away dirt leaving no damaging residue, again keeping away from transfers and lining. Then you have an idea of how to proceed. 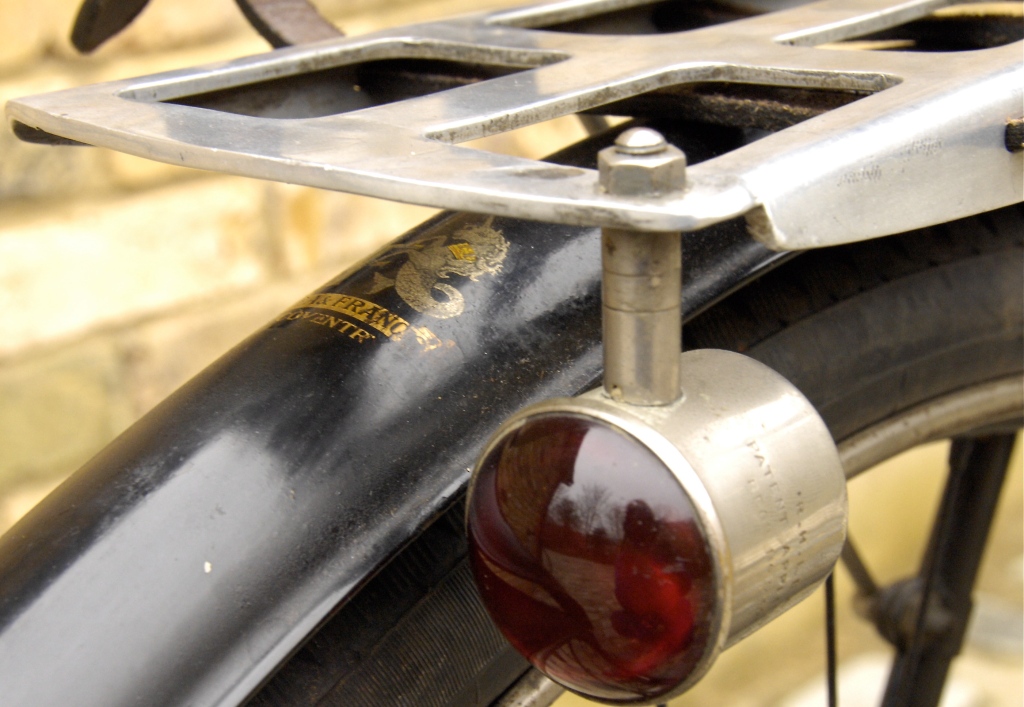 I would say that my approach is much more about preservation than restoration. For instance, if a bicycle has original transfers I would not consider re-finishing it, even if they are just fragments. Modern reproduction transfers, if you can get them, are often little like the originals (see BSA below and Lea & Francis above), particularly if they contain gold and silver. I dislike varnishing over transfers as many people do because it looks inconsistent with the original finish and can yellow the transfers badly. I prefer to use an acid free polish like Renaissance Wax, which is used by museums to protect metal items and paintwork. Re-applied sparingly from time to time this provides good protection for fragile transfers, and has nothing harmful in it to degrade them. However, you do need to test a small area first to make sure the transfer is not affected in a negative way.

Modern paint finishes, too, are unlike the finishes of 50-120 years ago. (There is a parallel in car restoration where modern 2-pack paints look so very different to original cellulose paint finishes. 2-pack paint acquires no patina with time, whereas cellulose ages gracefully.) An example is my Lea & Francis Roadster. This bicycle is completely unrestored and in exceptional condition. The original enamel has more of a satin look, having been rubbed down many times before final polishing, and also due to the nature of the enamel used. Powder coating has no place on a vintage bicycle. It does not look at all ‘right’ in my opinion and should you need to remove it, it is a nightmare.

Likewise old nickel plating is quite different to nickel plating available today. The chemical constituency of modern nickel makes it look a different colour as well as having a different surface sheen. Take a look at the like-new original nickel of the 1908 Lea & Francis below. I particularly hate re-plating over pitted metal. This can also be dangerous when over ambitious polishing to get rid of pitting can thin the corroded metal to unsafe levels. I have heard of more than one re-plated handlebar breaking as a result of this. Better, I think, to leave the pitting, accept it as part of the history of the machine, and just clean and burnish it to distinguish the bright parts from the painted frame. I did this with the Rover safety bicycle. 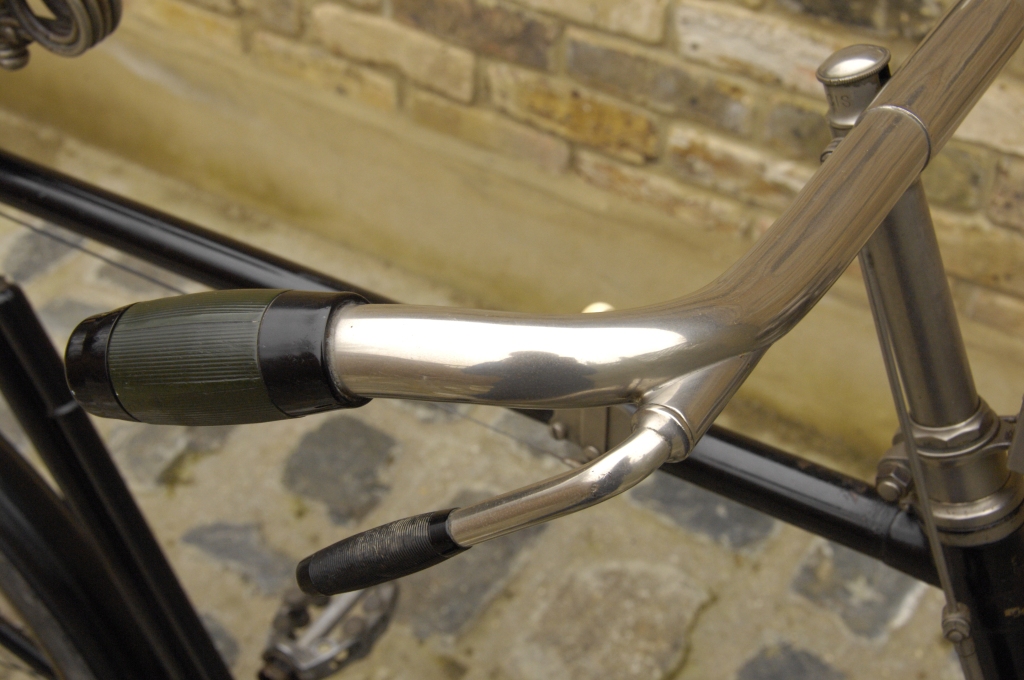 The result of re-finishing and re-plating can mean that the bicycle looks very little like it did when new, although it may seem perfectly acceptable to people who have not researched the subject. I would much prefer to see a distressed original bicycle showing a history of its previous use and the patina of many years, than a shiny, glitzy machine purportedly restored to ‘like new’ condition. Very often corrosion looks worse than it is and careful cleaning of metal using different grades of wire wool, brass brushes and polish can produce a very acceptable finish. Here is an example of just that on my Pitard. I disassembled the corroded items on this front derailleur and cleaned off the corrosion on the wire wheel of the bench grinder. This was followed by polishing with increasingly finer grades of wire wool, and finally a protective coating applied to prevent it going rusty again. Jade oil is good for this purpose. I could have had these parts re-chromed, but deep polishing would have had to be done to remove the pitting, and then the newly plated shiny items would have been completely inconsistent with an otherwise original bicycle. I much prefer the the more subtle and restrained look achieved here. 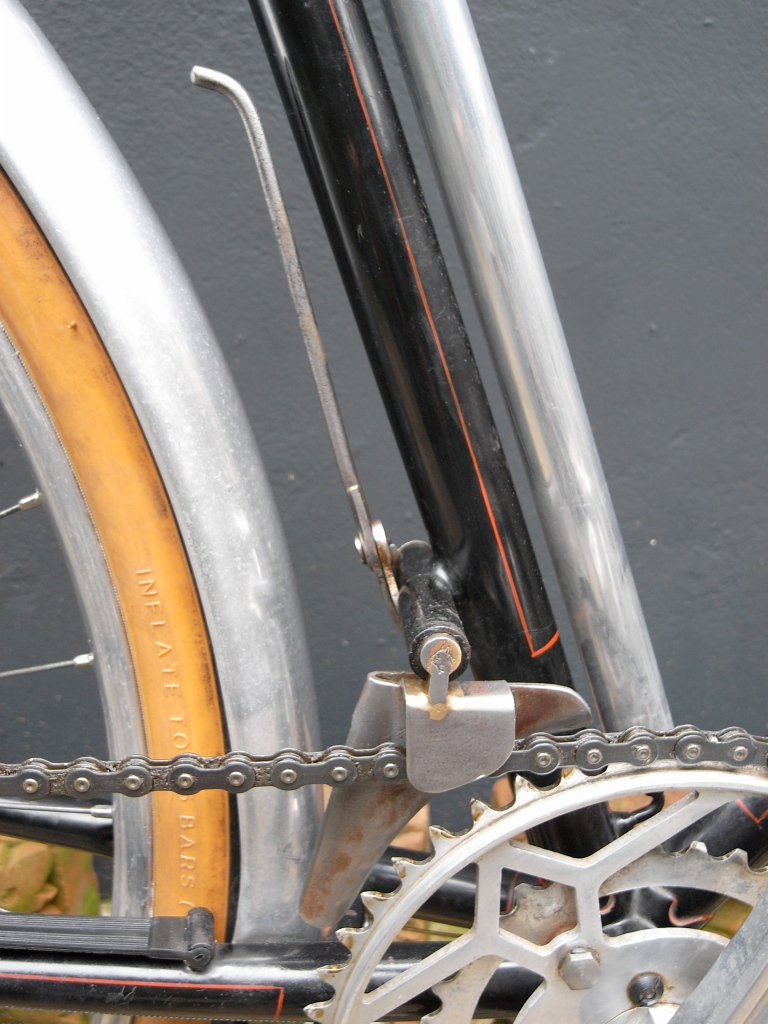 I’ll be covering some more aspects of preserving vintage bicycles in later posts.