This week sees track cyclists from all over the World descend on London for the Track Cycling World Cup at the new Olympic velodrome in London. This is the first public event at the track. I was lucky enough to get a ticket for the session last night, the qualifying rounds of the Team Pursuit. The building designed by Hopkins Architects, is beautiful. The curvy exterior is clad with beautifully figured Larch, which will age well, and there is much nice clean detailing in this minimalist building. The view from every seat is spectacular, and the venue is well lit and the seating comfortable. Above all the track appears to be fast, and times were edging towards World record standards in both the Women’s and Men’s events, the men averaging over 60 kph. The ever so slightly partisan crowd created a huge din for the GB teams, the men emerging to a recording of the bells of Big Ben (!), which helped them both through to the final, the Women against Canada, the Men face Australia. 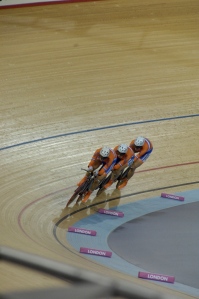