I recently carried out some work on this frame which in my opinion is one of the great masterworks of English lightweight frame building. It was built for Ray Bennis by H.R.Morris of Walthamstow, East London, in October 1963. Morris owned the bicycle shop that I used to frequent when I was in my late teens, and I was very fond of him. He was a big man with hands like bunches of bananas, but his work could be incredibly detailed and delicate. The lug cutting on this bicycle, all done with a tiny fret-saw and files, is second to none. His initials ‘HRM’ are cut into all the lugs, even at the bottom bracket, where the cutting is at its smallest and most difficult. These lugs took approximately two weeks to cut. It is rumoured that there are thirteen such bicycles built by Morris, but this is highly unlikely. I have seen only four similar frames, and all are quite different.

The collector that owns the bike wanted me to clean and conserve the frame, chrome and transfers. The frame is in its original finish, with some later touch-ins. After assessment, and tests on the underside of a tube, the frame was very carefully cleaned using Vulpex liquid soap mixed with water. This dissolves the grease and other grime very gently. A hog bristle brush was used to clean out the lug cutouts. After that, some over-spray was removed using Renaissance Pre-Lim. Chrome was cleaned using 0000 steel wool. Some new off-white lines were painted to replace the lost lining (fragments of which were visible under ugly vinyl tape) marking the border between paint and chrome, which gave the frame a ‘lift’. Finally it was protected with four or five thin coats of Renaissance Wax.

It was a pleasure to handle this wonderful frame… a Rembrandt of the bicycle World. 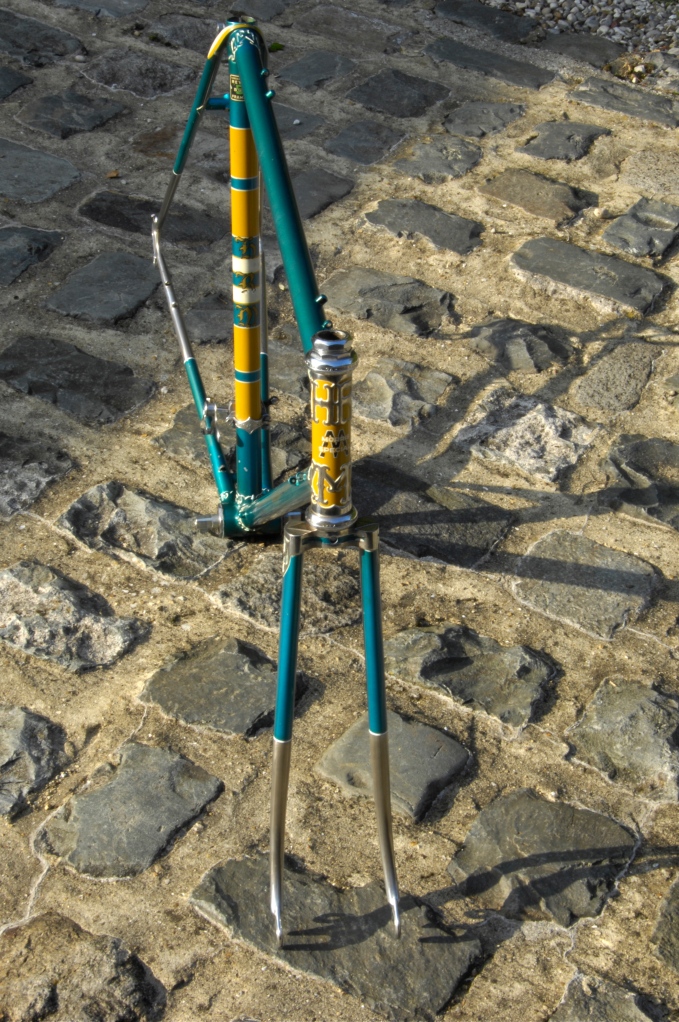